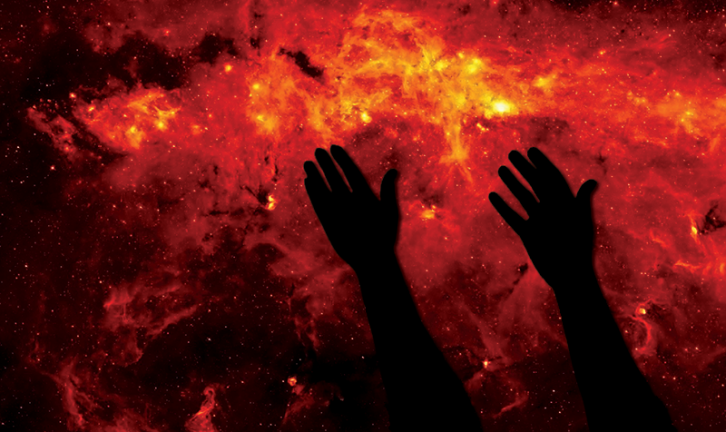 “Now it came to pass, when the time had come for Him to be received up, that He steadfastly set His face to go to Jerusalem, and sent messengers before His face. And as they went, they entered a village of the Samaritans, to prepare for Him. But they did not receive Him, because His face was set for the journey to Jerusalem. And when His disciples James and John saw this, they said, “Lord, do You want us to command fire to come down from heaven and consume them, just as Elijah did?” But He turned and rebuked them, and said, “You do not know what manner of spirit you are of. For the Son of Man did not come to destroy men’s lives but to save them.” And they went to another village.” (Luke 9:51-56)

James and John had their own leading on what should have happened to the Samaritan village in which they were all just rejected. They had recently been with Jesus on the Mount of Transfiguration. They had seen Elijah and were perhaps remembering how he called down fire and destroyed the 850 false prophets. So, with that fresh in their hearts and minds, they felt justified in asking Jesus if they could call down fire.

However, Jesus silenced their emotions that day and spared the city from their desire call down fire and burn it to the ground. Remember, they were both apostles, both martyred for the cause of Christ, but they both got it wrong on that particular day. To glean from their experience, we recognize that we have to be so careful not to allow our feelings to get in the way of the Spirit’s leading. Left to themselves, the apostles’ erroneous leading on that day could have devastated and even ended the lives of many. Jesus would have none of it.

It’s an awesome responsibility to lead in any capacity, but it’s even more so when you are endeavoring to help God’s people discern His will. Why? Because it is so easy for our mind, emotions and will to get in the way.

A brother once told me that when he was 14 years old, he had an unusual experience with Jesus. He shared the experience with his Dad, who then sent him to his pastor. Immediately the pastor, upon hearing the boy’s testimony, said he was destined to become a pastor and should begin studies to that end as soon as possible. For 30 years, this man lived in the sincere, but false, expectation spoken to him by this pastor. He knew he wasn’t called in this way, but his mentor had so much influence over him that he couldn’t shake his words.

It wasn’t until he came into a personal revelation of who he was in Christ that he was set free of this yoke. He realized, as John the Baptist said,


“I Believe the Lord Is Saying…”

When I believe there is a fresh “word” for someone, I have learned to begin this way, “I believe the Lord is saying…” or “I feel like the Lord would want you to know.” Because to say “thus saith the Lord” and not be utterly and absolutely clear that it is the Lord, is, by definition, using His Name in vain.

Because to say “thus saith the Lord” and not be utterly and absolutely clear that it is the Lord, is, by definition, using His Name in vain.
This brings a transparency to the “word” and takes the absolute “thus saith the Lord” out of it. It’s not that I’m afraid to say it, I simply know my own weakness and stand in the “fear of the Lord” about declaring an absolute in His Name.

“Where words are many sin is not absent.” (Prov 10:19) To say it another way, if someone always has a “word” to share, be very cautious of the validity of the word. The Lord gave us the Bible as our roadmap and His Spirit as both instructor and guidance counselor. Because of this, most of our decisions will (and should) come out of the Word of God and prayer as the Holy Spirit helps us. Again, I urge caution. If someone is continually speaking “words from the Lord” over you, recognize that things may be getting spiritually “off” and trust God for wisdom and mercy in navigating the situation.

Two Apostles speak directly to the issue. First the Apostle Paul says, “Do not quench the Spirit. Do not treat prophecies with contempt but test them all; hold on to what is good…” (1 Thes. 5:19–21) Then John, who years before wanted to call the fire down, now as an aged Apostle writes, “Dear friends, do not believe every spirit, but test the spirits to see whether they are from God, because many false prophets have gone out into the world.” (1 Jn 4:1–2) Jesus is faithful to mercifully train us and teach us over time.


Both of these passages are calling for the same thing: For God’s people to “test” to see if the “word” spoken over them is, indeed, from God. These scriptures were written over two thousand years ago and Jesus warned that in the last days many would be deceived. To combat that deception, God’s people desperately need greater wisdom to discern what is truth. If, after careful testing, the word is from God, then you can “hold on to what’s good!” If not, lay it to the side.

There are very clear biblical and practical tests to vet, if you will, a “word” spoken over your life. Any believer seeking God’s true guidance should be aware of and utilize these tests.

To this point Frangipane says, “The restraints I suggest are not to hamper the prophetic but to place prophets as background players on a stage where the Word of God is the main attraction. One prophet may have a genuine warning yet miss completely the timing of his insight; another ministry knows something will happen on a certain date but isn’t sure of the details. Remember, when Paul urges us to “let the prophets speak,” he also counseled, “and let the others judge” (1 Cor. 14:29 KVJ). Do not be afraid to let your witness be judged, and if you question a prophetic witness, don’t be shy about humbly saying that you don’t bear witness.”


Don’t Allow Yourself to Become Bitter

It’s time to be set free!

The same Jesus that called Lazarus back from the dead, went a step further. Once Lazarus was alive, yet still bound in his grave clothes, He declared “Loose him and let him go.” Jesus desires life and freedom for all of His children. Many of God’s people need to be set free from the bondage of an incorrect word that has incapacitated them for years. May today be that day for you!

A Simple Prayer of Freedom

To gain your freedom, you could pray like this:

Lord, I know this word was spoken over me and yet I have never felt like it was by Your Spirit for me. Release me of its binding power and from the mental anguish I have suffered. And if I have let bitterness take root in my heart, forgive me and help me forgive others so that true healing can take place. Now Lord, may I be free to move into all Your will in my life.

Fire in the Mountains
Rocks of Offense